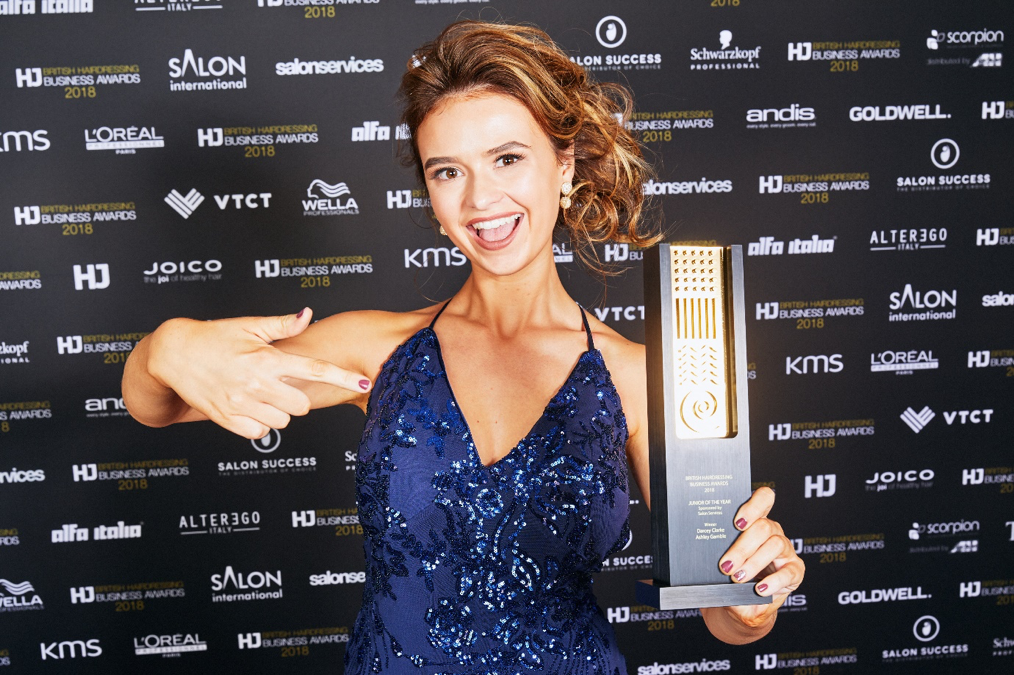 Darcey Clarke from Ashley Gamble located in Shifnal, has been named as one of the country’s brightest hairdressing stars having won at HJ’s British Hairdressing Business Awards 2018.
Darcey was crowned ‘Junior of the Year’, sponsored by Salon Services, during a star-studded ceremony, hosted by TV presenter Vernon Kay. Held at the Park Plaza Hotel in London, the event was attended by over 800 hairdressers, VIPs and household names.
This category was open to any junior or assistant hairdressers who has been in training for a maximum of three years up to the end of June 2018. Darcey impressed the judges thanks to her commitment to training, her career aspirations as well as passion for hairdressing.
Jayne Lewis-Orr, executive director of the British Hairdressing Business Awards said; “Huge congratulations to Darcey on being named Junior of the Year. She is a fantastic ambassador for the industry with skills and vision that make her the perfect winner. Through these awards, we champion and celebrate the very best within British hairdressing – everyone from the Front of House Team to the Business Director. Hairdressing is often undervalued as a career choice despite the opportunities it affords people including worldwide travel as a session stylist, flexible working as well as a creative and business outlet for driven individuals.
“There are over 40,000 hairdressing, barbering and beauty businesses in the UK, with the number growing daily. The industry employs nearly 300,000** individuals with over half being self-employed and it is a hugely innovative industry and one we are all incredibly proud to work within.”
Launched in 1998, HJ’s British Hairdressing Business Awards promote professionalism, innovation and excellence; while recognising those individuals and teams who work tirelessly to raise the profile of the hairdressing industry, with previous winners including Toni&Guy, Rush, Electric and Lee Stafford.
Commenting on winning the award, Darcey, said, “ I am utterly over the moon! I’m never speechless but this time I am. It is such a great honour to have been recognised, and only after my second time of entering. What a wonderful way to kick started my career. I’d like to thank my salon Directors Ashley and Stephanie, and all the team at Ashley Gamble. They’ve been brilliant over the 3 years I’ve worked there. This award is really for them.”